The economy of the United Arab Emirates (or UAE) is the 5th largest in the Middle East (after Iran, Saudi Arabia, Turkey, and Egypt), with a gross domestic product (GDP) of US$501 billion (AED 1.5 trillion) in 2022.

Internationally, UAE is ranked among the top 20 for global service business, according to AT Kearney, the top 30 on the WEF “most-networked countries” and in the top quarter as a least corrupt country per the TI’s corruption index.

The government of the United Arab Emirates announced a broad restructuring and merger of more than 50% of its federal agencies, including ministries and departments, in an attempt to deal with and recover from the economic shocks following months-long coronavirus lockdown.

In late 2021, it was announced that UAE’s banking assets are expected to grow by between 8 per cent and 10 per cent in 2022 as the second-biggest Arab economy continues to recover from the covid-19 pandemic. It was also announced the UAE’s economy might grow at a faster than projected rate, reaching 4.6% in 2022.

Highlights of The UAE Population Statistics

There are many factors contributing to the rise in population of the country, one of them being influx of immigrants. The number of foreigners settling in the UAE has grown due to the plentiful job opportunities the country offers.

AGE: It points towards a reliable healthcare system and longer life expectancy. The working population(age 25-54 years) amounts to 6.55 million people and it outnumbers the young and the old population.

CITY: The UAE consists of 7 separate emirates among which Dubai has the largest population of around 3,488,745 followed by Sharjah with 1,786,000.

NATIONALITY: More than 200 nationalities are present in the UAE now. Among them, Indians occupy the highest position with 2.77 million followed by Pakistanis with 1.28 million. The other nationalities include- Bangladeshis, Filipinos, Iranians, Egyptians, Nepalese, Sri Lankans, Chinese among others.

RELIGION: Although Islam is the main religion in UAE with 76.9% of people practicing it, we have to remember that this country is home to many expats. So along with Muslims, we can also see Christians, Hindus and Buddhists and other religions thriving here.

DUBAI is the industrial focal point of the UAE.  It is an international hub that is home to diverse nationalities. As mentioned above, it is the Emirate with the highest population. In 2022, the population of Dubai stands at 3,488,745.

It is not just a center of commerce. From alluring desserts to sunny beaches, this city has also been attracting a large number of tourists for many years now. 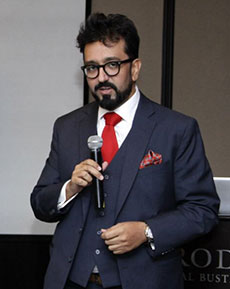